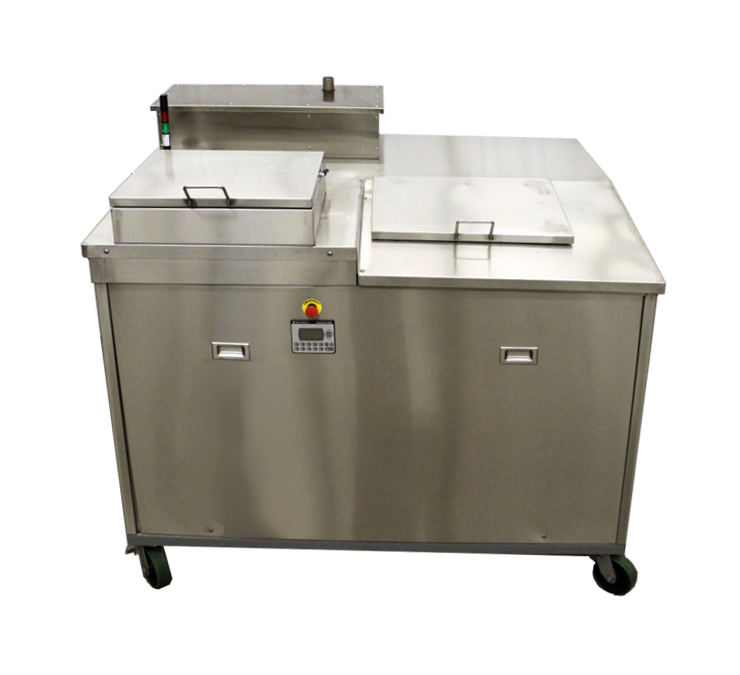 As part of our longer term goal of offering broader food waste reduction solutions, Nourished Planet has partnered with MPE Services, Inc. to offer the Biogreen Organic Solutions (Biogos) aerobic digester. Aerobic digestion is a biological process in which oxygen-loving microorganisms are used to consume organic matter and convert it into stable solids, carbon dioxide and more organisms.

Biogos is an industrial-sized aerobic digester capable of processing 500, 1,000, and 1,500 pounds of organic waste. The largest machine processes the equivalent of 750 full meals’ worth of food.

Biogos collects organic food waste and reduces it to 10 to 30 percent of its original weight in a 24-hour period. This continuous process uses a special mix of bacteria to digest the food. The final byproduct is a dry, compostable product that can be considered a sterile biomass. It is approximately 95 percent dry and can be stored for several months at a time.

Every day, restaurants, cafes, buffets, cafeterias and supermarkets discard hundreds of pounds of food — around one-third of all food globally. Meanwhile, some 1.3 billion tons of food is not consumed and 4 to 10 percent of food purchased is thrown out before even reaching the plate. It might surprise you to learn that as much as 40 percent of all food raised or grown in the United States is not even eaten.Between 1974 and 2003 food waste increased by 50 percent, according to some estimates, which is resulting in millions of tons of compostable organic waste being dumped in the landfill every day. While all forms of waste have increased in recent years, food waste is the largest single component sent to landfills. Food waste is the third largest component of generated waste by weight and — because of its low composting rate — is the largest component of discarded waste by weight.And in a time of increased concern for climate change, waste is an oft-overlooked villain — being responsible for 135 million tons of greenhouse gases every year, or 1.5 percent of greenhouse gases emissions globally.

Businesses account for nearly 60 percent of all the food waste generated, and hauling and tipping fees have continued to climb over the past 5 years. As new legislation is enacted requiring even higher standards of diversion, waste disposal and tipping fees can be expected to jump even higher. Planning for this eventuality now will give the customer more leeway to experiment and find the best solutions for reducing their waste disposal costs.

While many waste haulers offer food waste collection for composting, they must provide additional containers and add trucks to their current fleet to keep organic waste separated from other solid waste. The addition of equipment and services needed to segregate the waste streams and provide additional disposal and processing options increases fuel costs, which are passed on to the consumer. And, of course, there is the associated increase in carbon emissions, which everyone pays for through so-called “externalities,” such as increased health costs.Stored waste also can become a breeding ground for pathogens and bacteria — producing foul odors and attracting pests. Improperly stored waste can generate leachate that can be unsightly and can cause a cross contamination risk over a wide area.Food waste can only be stored for a few days, and bins must be picked up several times a week or even daily. Being mostly water, food is one of the heaviest wastes, making it among the costliest to transport and dispose.

Given food waste’s complexity, there is no perfect method of dealing with it and there are pros and cons to each solution. While transporting and disposing of food waste is one of the most common methods of dealing with it, this also is one of the most expensive.In many parts of the country, composting is the most widely accepted and readily-available method of waste diversion. While sending organic waste to a composter is an acceptable means of dealing with organic waste, this tends to only shift associated problems from the food waste generator to somewhere else. Even as composting companies work to make their process more efficient and eliminate many of the associated problems, most have yet to achieve this goal.But luckily, new technologies are being developed which are capable of processing food waste at the source. By treating food waste at the source, many of the handling and storage issues are reduced or eliminated. This also greatly reduces or eliminates food waste disposal transportation costs for customers.

The Biogos Food Waste Digester uses aerobic digestion as the first stage of food waste processing. Aerobic digestion is a biological process in which oxygen loving microorganisms are used to consume organic matter and convert it into stable solids, carbon dioxide and more organisms. Aerobic microorganisms, like all living things, require 3 things to live and grow: food, water and oxygen.As these microorganisms eat and grow, they produce more and more microorganisms in a near-constant reproductive process. By optimizing the environment through maceration, digestion, and temperature control, the digestion of organic waste accelerates significantly, allowing larger volumes to be processed in a shorter period of time. Aerobic digestion alone can reduce food waste by as much as 50-60 percent by volume.Anaerobic Digestion, commonly experienced during composting, produces greenhouse gases such as methane (CH4), Volatile Organic Compounds (VOC’s), Ammonia (NH3) and Carbon Dioxide (CO2), and hydrogen sulfide (H2SO4).

Aerobic Digestion, unlike anaerobic, does not produce the worst of the greenhouse gases and only a fractional amount of Carbon Dioxide (CO2) in comparison. The aerobic process results in a more complete digestion of waste.